Congratulations to our local girls!! 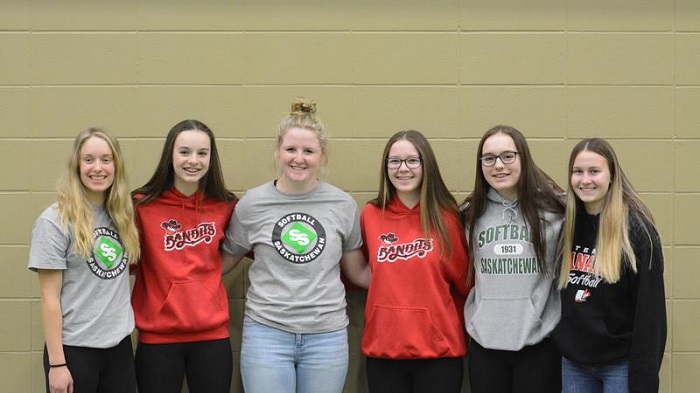 A group of softball players from the Battlefords have recently been named to represent their community, and province alike on Team Saskatchewan’s High Performance Teams at the U14, U16 and U18 levels.

The teams will participate in a tournament held March 27 to 31 in Oklahoma City, Oklahoma.

Kayli Cooper and Maren Kachmarski were named to the U14 team, while Rees Kachmarski, Maren’s older sister, was the lone Battlefords’ representative selected for the U16 team.

Sydney Cooper, Kaibree Head, and Melyna Bahler will play for Saskatchewan’s U19 team.

District 7 director of Sask., softball, Yvonne Michnik, believes there are a number of benefits for the young women attending an event like this one.

“It’s a great opportunity for these girls,” Michnik said. “I think it really builds character for each girl that has something like this to look forward to, and it also is good discipline for them. They will be able to make new friends from all over the province and in the U.S.; they’ll probably find new friends for life.”

Seventeen-year-old Sydney Cooper said the thought of travelling to Oklahoma to take part in an event like this is something she is very much looking forward to.

“It’s a really big deal,” Cooper said. “I’ve never been on a team like this before, and it’s a really good experience. We’ll get to meet other girls from around Saskatchewan, and we get to go down to Oklahoma together, so it’s pretty amazing.”

With a passion for ball undoubtedly running in the family, Cooper, who pitches, said growing up it didn’t take long for the competitive spirit to come out even in just a simple game of catch in the backyard.

“[It was] very competitive,” Cooper said with a smile. “Especially when pitching. Me and my sister would always have competitions about who made the best pitch.”

Maren Kachmarski, who grew up playing with Cooper since about age seven or eight, said ball for her too, is a sport that really came naturally, due to her family’s love of the game.

“My parents played slow pitch when they were younger, and that’s actually how they met,” she said. “My sister also play(s) softball, so I just kind of followed their footsteps.”

Because she is three years Maren’s senior, Rees said the sisters did not get to play on the same team a lot growing up. With the pair each making Team Saskatchewan in their respective age groups, the trip to Oklahoma at the end of the month will provide an opportunity for the two to share the experience.

The elder Kachmarski said she’s looking forward to the trip.

“I think it’s going to be a really good opportunity just to play with other people from around the province and get to know a new group of girls,” she said. “[It’s a chance to] experience new coaches, and just a different style of ball in the U.S.”

Melyna Bahler, who was named to Team Sask.’s U19 roster, said she received word that she had in fact made the team when her teammate and good friend, Kaibree Head texted her to let her know.

“I was actually in class when Kaibree texted me and told me,” Bahler said with a laugh before adding, “It’s pretty exciting, especially playing with new players in a different area with different teams to play against.”

For Head, athletics have always played a prominent part of her life, with the 16-year-old having played everything from soccer to basketball and volleyball growing up. Ultimately, Head, who still plays basketball on the high school team, said softball stood out due to its year-over-year consistency.

“Softball was just one of those sports that you just stuck with it, nothing ever really changed with it; you’re kind of with the same group of girls and nothing really changed.”

Manage your identity from the palm of your hand to the top of your desk.